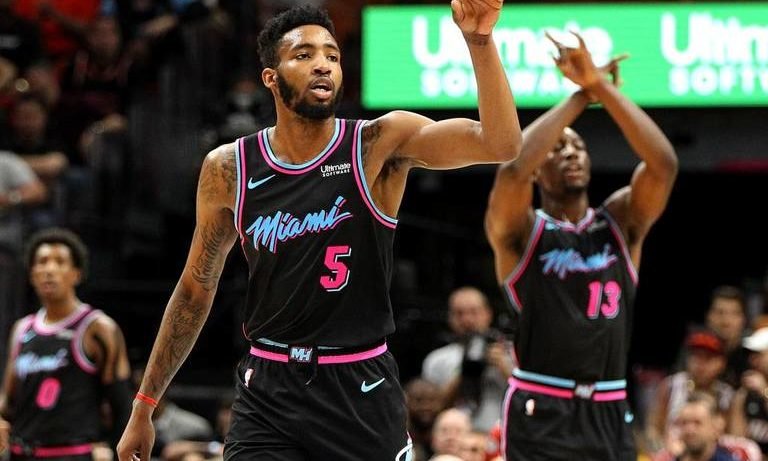 There hasn’t been an invitation to this year’s Slam Dunk Contest yet, but Derrick Jones Jr.’s athleticism has earned him something else.

A spot in the Heat’s rotation.

After starting the season as a situational player, Jones has become a consistent part of Miami’s rotation because of his athleticism and versatility on both ends of the court. Entering Tuesday’s contest against the Bucks that kicks off a four-game trip for the Heat (21-20), the 6-foot-7 forward has played in 17 of the past 18 games.

Jones, a 21-year-old who went undrafted out of UNLV in 2016, has found a skill he can excel with the help of his leaping ability and persistence. Nicknamed “Airplane Mode” because of his high-flying game, Jones has turned himself into one of the NBA’s top offensive rebounders at his position.

“He has a knack,” Heat guard Dwyane Wade said. “Some people just got a knack for the ball. He’s one of those guys. He has great timing, but he goes every time. He goes every time, and he might get one or two a game. But a lot of times, he opens up things for other guys. But it’s just having a great knack, and it’s a will to go in there and do the tough things.

Since becoming a consistent part of Miami’s rotation, he has averaged 9.3 points, 5.8 rebounds (2.6 offensive rebounds) and 1.4 steals in 17 games since the start of December. The Heat has outscored teams by 68 points with Jones on the court during this stretch, which is the second-best plus-minus on the team behind only Justise Winslow (plus-120).

“It’s not all athleticism,” Jones said of his offensive rebounding. “It’s mostly timing. You can’t just out athlete everybody. Sometimes you got to box people out and put your body on somebody, and then try to go up and get the rebound. I’m not successful with 10 out of 10, but I’ll live with five out of 10 or four out of 10.”

Among the players who stand 6-7 or shorter and have played in more than 10 games this season, Jones has grabbed the offensive rebound on a league-best 9.2 percent of Miami’s misses when he’s on the court. Jones’ offensive rebounding rate is tied with Bam Adebayo for second-best on the Heat, only behind starting center Hassan Whiteside (12.9 percent).

“If I crash the offensive glass 20 times and I get only one rebound, I’m probably crashing and I’m probably going to open up a rebound for one of my teammates like Bam, Hassan or [Kelly Olynyk] or [James Johnson] whenever we’re on the floor together,” Jones said. “If I crash a lot, then the main focus is probably going to be on me. Or if Bam crashes, the main focus is going to be on him. So they got to pick their poison.”

It’s that mentality that has the Heat averaging the third-most offensive rebounds this season with 12.1 per game. This is new for the Heat, which has been ranked in the bottom 10 in offensive rebounds in seven of the past eight seasons.

But it has been a part of Miami’s formula this season, with offensive boards helping to create extra opportunities for a Heat offense that owns the third-worst team shooting percentage at 44 percent. Miami is averaging the second most second-chance points in the league at 15.2 per game to help make up for its inefficiency.

That emphasis on offensive rebounds began in the offseason when Heat coach Erik Spoelstra instructed summer league coach Eric Glass to have his players crash the glass more. Jones and Adebayo were on Miami’s summer league team.

That’s exactly what Jones has done, and it has earned him consistent playing time.

Next, Jones hopes his improved on-court productivity paired with his athleticism earns him a spot in February’s Slam Dunk Contest. He wants an opportunity to redeem himself after finishing as the runner-up in the 2017 Slam Dunk Contest.

“If they call me for it, I’m definitely doing it because some people would say that’s a once in a lifetime deal,” Jones said. “It would be my second time getting there if it happens, and I’ll never decline that.”